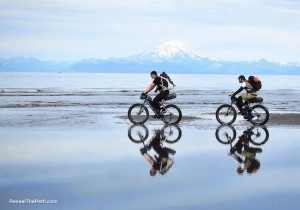 A new cycling film currently on tour is an excellent example of how NOT to make an adventure movie. Reveal the Path is the latest in a long string of travel pics that despite its title and several statements to the contrary assumes the destination is more important than journey. With a presumably large budget for an international bicycle excursion bankrolled by Salsa Cycles this potentially awesome film should have offered viewers more than a 1-hour 11-minute vacation reel.
Pedaling through some of the most exotic bike-packing destinations in the world The Path’s filmmaker Mike Dion has all the necessary ingredients to cook up a delicious story. From the opening frames a group cycling buddies gather over drams of whiskey in a rustic Colorado cabin to plot a great expedition. Classic! Unfortunately through the planning of this trip the characters whose names you forget immediately upon introduction neglect not only to tell the audience where they plan to go but why. Without a compelling reason to motivate this trip the story immediately digresses into the self-indulgent travel log of socially mobile Americans abroad on bikes with the privilege of time and money few these days can easily afford.
With stops in Scotland, France, Switzerland, Nepal and Alaska Dion and his band of bikers ride from one village to the next. But never letting the audience know the names of towns they visited it’s virtually impossible to put into context culturally or historically each geo-location. An animated map with a progressing dotted line would have been helpful. Viewers have no idea exactly where in each of these very large countries the bikers have traveled. And depicting only incidental contact with the locals the film offers a very limited view of the communities they encountered.
Character voice-overs throughout the film claim to have learned a great deal from the people they met along the way.
“Travel is more than seeing the sights. A change goes on and it’s deep and permanent,” one rider says. “We have to open to those changes in our experience and horizons and be willing to be vulnerable in our travel and be touched by gestures of generosity and even take in the negative aspects of expressions of not being wanted. That’s natural for people. All of those things change us in ways and help us see the world differently than we might otherwise.”
Cliché expressions such as this are all the more frustrating when the film does very little to demonstrate them. The riders never share any of their own back-stories or give the audience the opportunity to understand how they might have grown or changed during the journey. To travel so far with out transformation limits the expedition experience to the scenery and the passage of time.
To create a good adventure movie the audience must be made to care about either the mission or the characters involved. The vague notion of travel for travel’s sake is best expressed is a cousin’s European holiday slideshow imposed on the family after Thanksgiving dinner. A true tale of adventure even for an audience of committed fans must include some form of conflict. Any physio-psycho-social-spiritual-moral dilemma that the characters overcome will do.  Failing that gratuitous action porn sequences that feature high-speed downhill descents or devastating end over end crashes might be worth the price of admission. But this film lacks even that.
Author’s note: It is incredibly difficult to write a negative film review. I constantly wrestle with contradiction of constructive criticism and the obligation to share an honest and objective opinion.  Though it is often easier to say something nice or nothing at all I believe that it is very important that we continue a thoughtful and aggressive discussion of what constitutes good adventure media.
With the advent of small inexpensive recording devices there is a glut of action movies on the scene today. I’ve had the pleasure of seeing scores of fabulous new movies just in the last few weeks traveling between the 5Point and Mountainfilm Festivals. So for me the bar of excellence is quite high. Distribution of these films will draw audiences both online and in theaters around the world. As the genre grows there is a lot of sponsor money on the line to support the best projects. I believe that is critical that we talk about what a good adventure movie looks like and what audiences should expect when they buy a ticket or a DVD or just download a file on YouTube.
Just because I write this blog mine is not the final word or the only opinion that matters. I cannot encourage readers strongly enough to write in and challenge my assertions. I too am open to criticism. I want only to engage a spirited dialog to hopefully offer filmmakers some guidance on how they might improve their craft. And though I’ve been warned that I might find myself lonely in the expression of my contrary thoughts I hope that you will join me in this very exciting conversation.  ~JEM