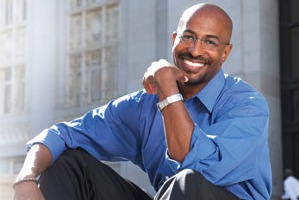 The problem with the American dream is too often we’re caught sleeping. At the very least we let our attention wander in the bliss of freedom as the things in life that matter most fail neglected or are simply taken away.
In his new book former special adviser to the Obama White House Van Jones drafts a thoughtful plan for the reconstruction of simple American ideals and principles that secure the dream of a better life for everyone willing to work hard and play fair. With a vision centered on the benefits of a fully integrated green economy and practices of sustainable living Jones’ book Rebuild the Dream offers up a detailed analysis of the circumstances that led to the raise of the Tea Party and the Occupy Wall Street movement. The author also provides a game plan for political activists looking to transform hope into lasting change and get the U.S. economy working again for everyone. 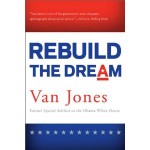 Invited by the Nelson Institute for Environmental Studies at the University of Wisconsin Jones recently visited Madison to address a crowd of true believers. Drawing upon themes in his book the co-founder and president an the organization of the same name made a solid connection with an audience eager to return to better times.
“We don’t have to wait,” Jones told them. “Once again we can be a nation of neighbors who were raised to look out for one another.”
The state of Wisconsin is currently embroiled in a fierce debate that has forced a recall election of governor Scott Walker. Immediately upon assuming office in 2010 the Republican signed into law legislation that stripped public employees, particularly teachers, of their collective bargaining rights. Jones railed against a system of government that vilifies and punishes those in society charged with the responsibility of keeping it together, those he calls heroes.
“They were the very heroes who we were taught to respect,” he said. “They never abandoned us in a crisis. We can’t let people who call themselves patriots be allowed to throw our heroes under the bus.”
At the core of his argument Jones demands the creation of system where hard working individuals are protected and not crushed beneath the wheels of progress. He advocates for economic development opportunities that take advantage of the growing need for renewable sources of energy while re-outfitting current systems to be more energy efficient. An all-the-above strategy to reduce our dependence on fossil fuel and create green jobs Jones said is the best way to turn the economy around.
“Deepen the diversity and restore the prosperity,” he said. “Everything that’s good for the Earth is a job. Find the people who most need work and give them the work that most needs to be done.”
Acknowledging the importance of personal responsibility Jones wants people across the political spectrum to realize that any hope of success in the future will require everyone to become involved. From demonstrations in the streets to community organizing, change will come by matching the power of elected office with the strength of an active social movement. And though many are heavily invested in maintaining the status quo by fueling our economy with extracted oil and natural gas, Jones insists that hope can be restored. With a subtle shift in priorities the demands of an engaged citizenry Jones says people in our nation can create and acquire jobs that will be the envy of the emerging worldwide green energy market and rebuild the American dream.
The Joy Trip Project is made possible with the support of sponsors Patagonia and the Nelson Institute for Environmental Studies