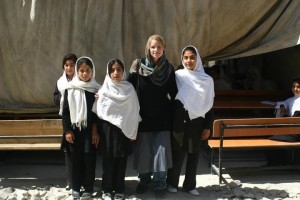 Women’s empowerment advocate Shannon Galpin was one of the many incredible people whose story inspired the creation of the Joy Trip Project. As the founder of the non-profit Mountain 2 Mountain her selfless dedication and sacrifice in service to women and girls in war torn regions of Afghanistan demonstrates a rare passion for taking action in spite of overwhelm odds. Add to that a talent for mountain bike racing and you’ve got an irresistible combination for a lifestyle worth emulating. A new film from Red Reel Media directed by Allie Bombach offers a brief but comprehensive look into the life of a single mother from Colorado who has put everything on the line to secure the safety and well being of others half a world away.
Shannon’s story is told in the first segment of a new online series called Move Shake. Premiering on the Internet June 7th the filmmakers aim to share the experiences of individuals like her who are directly involved in the creation of change. Sometimes at the risk of their own lives the activists profiled in the series offer audiences shining examples of ordinary people who are accomplishing amazing things. Breaking down barriers to progress Shannon’s primary mission to raise awareness for the plight women oppressed because of their gender and to create programs throughout Afghanistan that provide the resources and services they need to thrive. Having leveraged her own financial resources to make this possible Shannon is convinced that she is making a difference.
“We have changed lives. We funded two schools. We’ve paid midwives…We’ve created computer labs. We’ve gotten land for a future deaf school. We’ve started construction,” she says in the film. “All these things that we’ve done that are in process…it’s worth the financial risk.”
Everything that Shannon has accomplished since she founded Mountain 2 Mountain in 2006 is made all the more difficult by working in a war zone. The physical risk to her safety as she operates in an area still under control of the Taliban makes her story doubly compelling as audiences will undoubtedly ask the question, why? With a daughter to raise at home Shannon struggles against the criticism of her motivation, but she makes it clear to 5-year-old Devon that her decision to do such dangerous work is informed by a mother’s love.
“She needs to know that the choices I made were because of her not in spite of her,” Shannon said. “She was one of the reasons why I wanted to make the world a better place.”
Herself the victim of rape Shannon has a fierce conviction to protect women and girls in this part of the world where few make a stand on their behalf. By making positive change in Afghanistan she cannot help but hope to inspire others around the world to take up the cause and resist gender inequality wherever it exists.

MoveShake from RED REEL on Vimeo.
The Joy Trip Project is made possible with the support sponsors Patagonia, Rayovac and the New Belgium Brewing Company