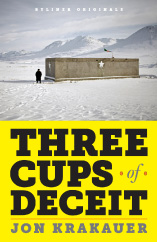 At the Mountain Film Festival in Telluride, Colorado last month a panel discussion convened to talk about the allegations raised in a recent 60-Minutes expose on Greg Mortenson’s Central Asia Institute. Made famous in his bestselling book “Three Cups of Tea” the non-governmental organization that builds schools in Afghanistan and Pakistan is at the heart of controversies that range from a fraudulent misrepresentation of facts in the story to the misappropriation of funds raised from the piggybanks of third-graders.
“He was very much one of my heroes,” said festival executive director Peter Kenworthy, “But if you tell someone it’s a true story it better be true…especially if you use that story to fundraise.”
In a piece for the new blog site ByLiner.com, mountaineer and journalist Jon Krakauer accuses Mortenson of fabricating his origin myth to line his own pockets. Called “Three Cups of Deceit,” the article details Mortenson’s mismanagement of CAI funds and suggests that he ran the organization like megalomaniacal dictator. Many in attendance at Mountain Film had read Mortenson’s book and supported his efforts overseas. And those who packed a  small meeting room at the festival demanded answers.
“What he’s alleged to have done is use Central Asia Institute money to promote his book, the proceeds of which went to him,” Kenworthy said. “And if that’s true it’s just wrong.” 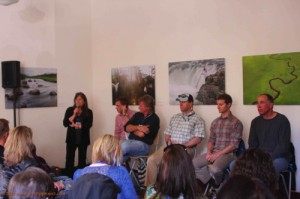 Motivated by rumors of improprieties at the NGO, Krakauer launched an investigation to uncover the truth. The 89-page article available online (http://images.bimedia.net/documents/Three_Cups_of_Deceit_Jon_Krakauer.pdf) is a scathing indictment of what he discovered.
“Mortenson has done much that is admirable,” Krakauer writes. “A huge number of people regard him as a hero, and he inspires tremendous trust. It is now evident, however, that Mortenson recklessly betrayed this trust, damaging his credibility beyond repair.”
So a stunned public stands shocked and disillusioned. Reactions from the panelist at Mountain Film ranged from reserved caution not to jump to conclusions to outright vehemence.
“Jon Krauker did not have a bee in his bonnet. He was pissed!” said National Geographic explorer in residence Wade Davis. “He personally gave $70,000 of his own money to an institution he had deep faith in.”
This sense of betrayal coupled with the alleged misappropriation of great wealth made for a lively discussion that spoke to the heart of the controversy.
“The issue of fiscal responsibility is belied by the fact that at the Central Asia Institute they could not keep a CFO,” Davis said on the panel. ”If you read Krakauer’s expose it was a revolving door because as one of them (a board member) said ‘Greg Mortenson treated the money like his personal ATM.’ These are not trivial accusations. And this was not the case of a well-intentioned person who just spaced-out on the checkbook.”
The details of Krakauer’s charges against Mortenson are well outlined in his article. And seekers of the truth should read it in order to establish an informed opinion one way or the other. But what is truly the issue in this case is how a single person like Mortenson is so quickly and profoundly elevated to a position of such adulation. How is it that we can so suddenly find ourselves devastated by the fall of one person?

“I’ll bet there are dozens, many, many more people like Mortenson,” said M. Sanjayan lead scientist at the Nature Conservancy. “They’re out there all the time, giving their shtick and it sounds way too good to be true. But what work are they really doing on the ground?”
Not on the panel but in the audience Sanjayan asked specifically what role does media play in promoting the good work of a single personality like Mortenson.
“The media is fundamentally lazy,” said panelist and Outside Magazine editor Chris Keyes. “It’s easier to tell people well-known stories because there’s a built in constituency and you know they’ll want to read about it. We are complicit as many media of turning him into as someone said a rock star.”
It’s perhaps fair to suggest that we are all lazy in this regard. With such horrible news coming out of Central Asia every day a heartwarming story Mortenson’s is easy to latch on to. But as the panelist informed the audience and others affirmed at Mountain Film, ending the so-called War on Terror can never be as simple as building schools in remote locations and educating girls.
“One person has called it the ‘whites in shining armor complex’,” said Carol Black, producer of the film Schooling the World. “That we’re going into these areas with complicated problems, but with really valuable cultural knowledge of their own, and bringing in our system of education and that’s going to fix them right up.”
It’s never that simple. But when the story is proven false we rush to shoot the messenger, not because he sold us a pack of lies, but rather because we bought them. By supporting Mortenson’s work those who embraced his ideas believed passionately that we could strike a blow against terrorism, poverty and the oppression of women with just a few dollars. All from the comfort of our homes in the United States we could make the world a better places and assume the role of hero by simply writing a check. While financial support is vitally important in doing good in the world, it’s equally important that we also become directly engaged in the process by more thoroughly investigating the organizations we support and insisting upon some degree of quantifiable proof of progress. And sometimes that includes getting on a plane and actually visiting the location where the work is being done in our name. That I believe is the duty of both philanthropists and journalists alike.
I’ve had the pleasure of knowing Greg Mortenson for a few years now. He’s a very kindhearted and charming man, soft-spoken, humble but very distracted, apparently to a fault.And while I believe that he is guilty of much that Krakauer alleges, I don’t believe that he did any of it to enrich himself. I sincerely believe that Mortenson has the best of intentions and was simply caught up in the unfortunate trap of his own fame and notoriety, playing the game as best he could to raise funds in support of his cause. I only hope that this episode does not discourage conscientious individuals to dedicate their lives and fortunes to the benefit of others.
It’s not so easy to save the world. Try it sometime and you’ll see. I suppose if it were simple everyone would do it. And those flamboyant few like Mortenson who achieve even a small margin of success wouldn’t be so interesting. But we have to get past the notion that one person will necessarily tip the balance in putting the world right. We can’t set ourselves up for failure by making the standard of success so high as to never be achieved or worse never attempted.
I believe that it is the small attainable goals, good deeds performed as part of an active socially engaged lifestyle, that offer the best opportunities to create worthwhile change that will last over time. Financial contributions to worthy causes should certainly continue. But there is lesson to take from the Greg Mortenson story as it continues. We always must look first to ourselves and not others as Gandhi said to “be the change you most want to see in the world.” ~ JEM