Eco Ninja, a review of the film by Jonathan Browning – The Joy Trip Project

11 Jun Eco Ninja, a review of the film by Jonathan Browning – The Joy Trip Project 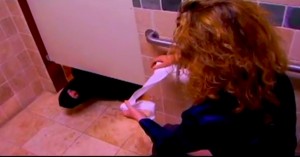 Environmental protection is hardly a laughing matter. Companies with offices around the world are stepping up efforts to minimize their impact on the planet by going green and there’s nothing funny about it. But a film by Jonathan Browning and Screaming Frog Productions shows what can happen when a cubical commander and his corporate overlords take their responsibilities for recycling and reducing waste a bit too seriously. With the management style of Steve Carell an office boss hires a stealthy black-clad warrior to enforce new policies of workplace sustainability.
Screened at the Mountainfilm Festival in Telluride Eco Ninja is a hilarious satire that pokes fun at the tedious little tasks each of us are expected to do at home or on the job in order to save the planet from the looming threat of climate change. With employees often overwhelmed by so many rules and regulations office managers are tasks to redefine what it means to go green.
“I say it means thinking outside of the box,” the boss says in the film. “And then recycling that box.”
Enter the Ninja. And as the body count escalates through this 6-minute 27-second short both office workers and audience learn the wisdom of conservation.
“Yeah, in this office now it’s recycle or receive…a blade,” the boss says.
As the Ninja wreaks havoc and the office drones cringe in fear it’s hard not wonder how much easier it would be to simply use less plastic, print double-sided documents and power-down computers when not in use. When the consequences of waste are a sudden blow to neck the virtues of sustainability seem infinitely more practical.
The overarching theme of the Eco Ninja as described by his boss is really quite simple.
“Protect mother earth and protect yourself by protecting mother earth.”