An intermittent wireless connection drove me from my room to the lobby for better service.  Otherwise accommodations in Lloyd Hall at Canada’s Banff Centre were incredible. Nestled in a valley surrounded by the snow-covered Rockies of Alberta, you’d be hard pressed to find much fault with the home of the 34th annual Banff Mountain Film and Book Festival.
I’ve had tougher assignments. In a cozy leather chair I sat with my laptop working up a yet another post for this blog. Looking up from the screen I happen to see walking past my friend and colleague Fitz Cahall. He’s the host and creator of the podcast the Dirtbag Diaries. I called him over. On his way to one of many fabulous presentations Fitz plopped down on the couch across from me for a chat.
“This place is truly amazing,” he said. “I can’t think of anywhere else you can meet and hangout with so many artists, poets, playwrights, musicians. You can be having lunch and sit across from a guy writing a symphony!”
Like many here in the U.S., for years I have enjoyed the adventure movies that go on tour from the Banff Mountain Film Festival. But I never knew anything about the institution that promotes them. The Banff Centre is a cultural arts facility whose mission is to inspire creativity. Inviting artists from all over the world, Banff provides a communal space where people can paint, sculpt, write, dance, take photographs and perform music. Visitors can get instruction to improve their skills or work independently and delve deeply into the creative process to evoke their muse.
Among the many disciplines cultivated at Banff are literature and film making that tell the stories of adventure in mountain regions throughout the world. Spanning more than a week, The Banff Mountain Film and Book Festivals are a showcase of the year’s best productions created to explore and celebrate the active lifestyle. Looking back after Banff there are many standout highlights worth sharing. 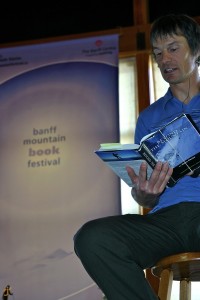 I did an interview with climber and now writer Steve House several weeks before. Then we discussed his new book Beyond the Mountain. At Banff House took the prize for mountain literature. You can hear our conversation online on the Joy Trip Project podcast.
House read a few passages from his book during one of two lunchtime lectures. And during a panel discussion on writing biography he was asked, “When is it a good time to write a story of someone’s life?” House replied, “I’ve lost a lot of friends in the mountains. There was some part of me that wanted to write my story myself while was still alive.” 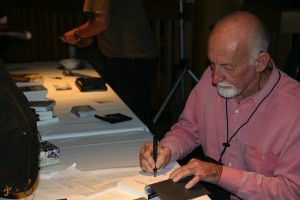 At the second lecture we heard from Royal Robbins.  He read from his new book To Be Brave, the first in a seven volume series called My Life, which received a special jury prize. In the passage he read Robbins described his first climbing experiences on a fragile hemp rope back in 1945. “They weren’t very strong and would probably have done very little to protect you from a fall,” he said. “But we had a saying, ‘the leader should never fall’.” 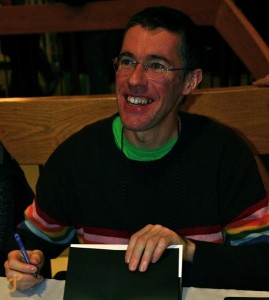 The literature grand prize went to Niall Grimes for his book Jerry Moffatt –Revelations. Though not accurately credited as being the ghostwriter of Moffatt’s life story, Grimes offers up a detailed account of a great innovator who declared himself the best climber in the world. “Very few people could have gotten away with that,” Grimes said. “But he went out and climbed the hardest routes anyone had climbed at the time and climbed them better.” 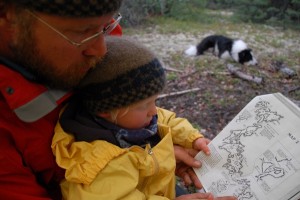 Karstern Heur and his son Zev in the film "Finding Farley" Photo: Karsten Heuer, courtesy of The Banff Centre

The grand film prize went to a movie that unfortunately I didn’t see. Finding Farley was one of 62 films shown out of 227 entries from 28 countries. Despite having access to the complete collection of movies in an on-demand screening room for media, this one got passed me. Finding Farley also took the People’s Choice award, selected by viewers who did see it as the most popular film at the festival.
This story depicts the journey of a family who treks 5,000 kilometers across Canada to follow in the footsteps of renowned author Farley Mowat. So surprised by the success of the film when accepting her award director Leanne Allison said, “I’m just glad we were invited to be here.” 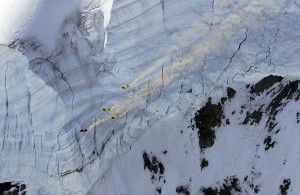 Other films I did get the chance to see will be included as reviews in upcoming posts to this blog. But two films in particular deserve mention now. Mont–Blanc Speed Flying received the award for Best Short Mountain Film. This 10-minute movie depicts a team of paraglide skiers making their away along a flight path through the rugged slopes of the French Alps from the top of Europe’s highest peak. Using a single camera in one long shot the film records the graceful decent of winged humans from this lofty perch occasionally touching ground to ski short turns on the snow below. Watching it viewers could imagine that they themselves could actually fly.
On the night I arrived in Banff I connected with the festival’s film coordinator, Lana Hettinga. I figured she’d have a bit of insight on the best films to see. So I asked her, “Of all the movies here, which one should I not miss.” With only a moments thought Hettinga replied “Solo.” 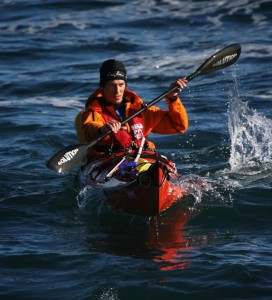 Winner of the Best Film on Mountain Sports prize Solo is heart wrenching from the opening credits. A garbled radio transmission plays to a black screen with subtitles. A lone kayaker on a first-ever paddle from Australia to New Zealand makes an urgent plea for help. His fate is uncertain, but you’re left with an immediate sense of dred as the story unfolds. You’re pretty sure he’s not going to make it.
The film then jumps to the beginning of the story as adventurer Andrew McAuley paddles away from his wife and young son. With the camera mounted to the deck of his kayak you can clearly see his face. Covered in a heavy white sunscreen his visage has the appearance of a death mask slashed with bitter scares of grief and fear.
“I’m so afraid,” he says wracked with sobs into the camera. “I’m afraid I’ll never see my wife and my son again… I don’t know what I’m doing. I wonder why I’m doing this. And I don’t have an answer.” 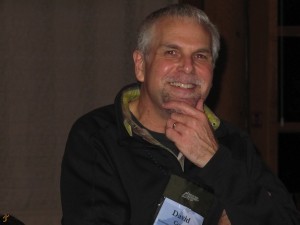 It’s through the power of film and storytelling that we explore this uniquely human desire to risk our lives purely for the sake of adventure. Though most of these mountain films end happily there is always that element of pending doom that rivets our attention. Banff Center executive director of mountain culture & environment David Cox  says the thrill of adventure is what keeps people coming back for more.
“Our ticket sales are up 10 percent from last year,” Cox said. “And that’s in a down economy. What a great way to have fun when you don’t have a lot of money.”
The Banff Mountain Film Festival goes on tour this week with stops across the country. Here you’ll find periodic reviews of films you’ll be able to see as well as a few interviews with filmmakers and authors. Hopefully readers of this blog will chime in with their questions and comments. After 34 years Banff is still going strong and the stories continue.
JEM