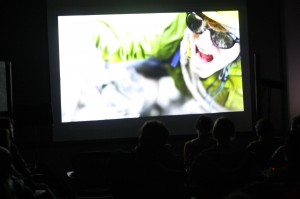 Late nights of movie magic are a common part of the Banff Mountain Film Festival. But not everyone was up until until 2 in the morning gorging themselves on pale ale, pizza and poutine. At least 30 students were actually working to piece together their final projects as part of the Banff Adventure Filmmakers Workshop. Learning from top producers Michael Brown and Keith Partridge aspiring scholars eager to make adventure movies of their own picked up more than a few pointers. Using the latest cameras and editing equipment the students created amazing projects in collaboration with their peers. The short film Hang On! received the top prize. 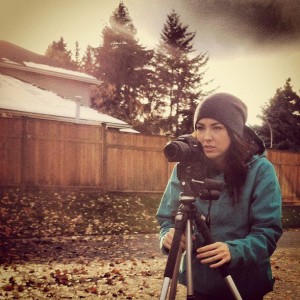 “Of course, in the panic of only having 6 hours to make the film we had no time to put a title on our document, so on the screen the file simply said “assembly1_1”,” said student producer Emilia Schmidt. “When they announced that “assembly” had won, the room initially fell silent and after a solid 5 seconds of silence with everyone looking around at each other my mouth came alive before my brain did ‘Oh my god, Hey! That’s US!’ Since that moment, we refer to ourselves as ‘team assembly’ .”
Schmidt along with teammates Louise Bentley, Emilie Gibeau, Mike Brown and Benjamin Jordan put together a beautifully shot and edited satirical short that draws the viewer into each scene setting them up for the punchline. Wait for it. Narrated by climbing great Barry Blanchard Hang On pokes fun at mountain culture for a laugh without taking itself too seriously.
With this win on the boards Schmidt said she looks forward to continuing her career in filmmaking.
“This adventure film workshop was probably THE single most inspiring adventure I have had in a long time,” she said. “As of late I have felt stuck in school not knowing what direction to take and how to follow my dream in producing documentaries.”
Now with some guidance and practical experience she’s on her way.

HangOn from Magnifik Media on Vimeo.
The Joy Trip Project is made possible with the support sponsors Patagonia, Rayovac and the New Belgium Brewing Company