On the Road with Solitaire: Two Years, Five Winters – The Joy Trip Project 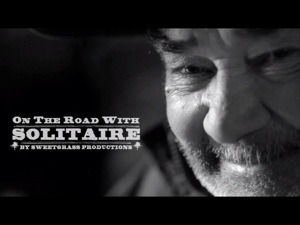 Often the best parts of a great film are scenes we never see. Left to be sorted from the scraps swept up from the cutting room floor, or rather the unused digits still on the hard drive, it’s those moments of stories untold that captivate and compel the mind to ponder those moments left behind the curtain as the credits roll. Filmmaker Nick Waggoner has so much more to share.
Throughout 12 episodes of his Internet series On The Road with Solitaire he offers up something far better than a blooper reel or a backstage glimpse of production. The web-only set of shorts from Sweetgrass Productions gives the viewer a genuine look into the lives of artist-athletes putting their hearts and souls on the line risking life and limb to deliver a true story of adventure meant to inspire.
The final installment Two Years, Five Winters posted last week to Vimeo. This film details less of Waggoner’s travels than the genuine emotion, passion and anxiety behind bringing his story to life. From the process of scene selection and editing all the way up to the world premiere he reveals much of the vulnerability and uncertainty most directors likely face as they titrate experiences that span hundreds of hours into a 50-minute feature that audiences will enjoy.
“You can’t watch something you created without recalling the sweat and anger and passion that went into the singular shot, the laughs and the love behind the camera, the diabolical and not ending disasters that can be warped into something beautiful on screen, when powered up with little smoke and mirrors and music,” Waggoner says in the film.
Despite this undeniable pressure he’s clearly thrives. Waggoner has obviously come to embrace the difficulties of life making films on the road. And without reservation he’s prepared happily to take on his next project. Just as adventurers should be inspired by the stories and images Waggoner share in his films, those who make movies might find themselves just as motivated to follow a similar course of production blending exotic destinations, a rich cast of characters and a sincere passionate pursuit of ski mountaineering. I for one am looking forward to his next film and hopefully an accompanying web series, this time on the road to place called Valhalla coming in September 2013

On The Road Episode XII – Two Years, Five Winters from Sweetgrass Productions on Vimeo.
The Joy Trip Project is made possible with the support sponsors Patagonia, Rayovac and the New Belgium Brewing Company