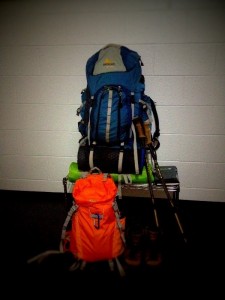 I usually find it tough to sleep on days like this. Here where the sun just barely sets light seeps in through the thick curtains and it never truly gets dark. I’m up early to pack a bag that’s not as heavy as it looks. The Alaska Backpackers Inn is a newly refurbished apartment complex in downtown Anchorage made to resemble a hotel poorly. The though clean, secure and a good value for the buck, the noxious smell of new paint and chemical antiseptics makes it tough to take a full breath. Traffic noise from the open window drones on through the night of the midnight sun. There’s no air conditioning, so it’s hot. And with all these distractions what lies in the days ahead has me juggling emotions mixed with both excitement and dread. Enough though my whole life has led up to this moment it seems that once again I’ve discovered my destiny on the road I took to avoid it.
Climbing in Alaska was inevitable. Despite my natural aversion to cold and altitude I was always meant to be here. Though deathly afraid of falling and freezing to death all my life I’ve been drawn to high places. But don’t think for minute that I have a special love for the mountains. Mine isn’t a story of fulfilling a life-long passion in pursuit of a dream. In an honest assessment of why I climb I discovered that I’ve got something to prove.
As an overweight kid with few friends growing up I tagged along with my brother and older boys in our scout troop hiking long miles and climbing hard despite my lack of fitness. I was always last and I just couldn’t shake the feeling that they were frankly trying to avoid me. I was obnoxious. A spoiled little punk with an over developed sense of entitlement I followed behind in desperate fear of missing out.
But through those early experiences I developed a profound appreciation for the natural world, for physical activity and cooperation with others. I grew up and in the fullness of time I became a leader. Picking up a few new skills here and there I worked to encourage others to travel safely and comfortably through wild places. As a guide in my 20s I helped a few people to find within themselves the strength to continue through difficult circumstance, to achieve their goals and reap the benefits of a spectacular view from the summit. For me the mountains where just a metaphor to define a journey of one’s destiny not over land but through the human heart and mind.
So in my profession today as an adventure writer arriving here in Alaska was really only a matter of time. It would seems that I am duty bound to encourage people to step beyond their comfort zone and press their luck to do what every rational thought says they shouldn’t but never once tells them why. Now in my 40s it’s been several years since I’ve spent an extended period in the mountains, but over the next two weeks I’ll travel with National Outdoor Leadership School to refresh my skills in travel over rock and ice and likely pick up more than a few new tricks. Next year a small group plans to put the first majority African-American team on the summit of Denali and I intend to go along with them.
It’s like I’m that fat kid again, desperately afraid of missing out. Not as fit as I once was but hopefully less obnoxious I aim to be a productive member of our team. But motivated now with new purpose I’m climbing again not because I have a special love for the mountains, but because I have something to prove. Our intension is to demonstrate that anyone with the inclination and willingness to try can have a place for themselves in the outdoors. Though every rational thought says you can’t or shouldn’t it’s my belief that we can all overcome these fears, doubts and apprehensions to ascend to the heights of our ambition and become leaders for others to follow.
African-Americans and other ethnic minorities represent a relatively low percentage of participants in outdoor recreation, climbing and mountaineering in particular. As a group we also have disproportionately high rates of obesity, high blood pressure, diabetes and other illnesses that could be prevented by better lifestyle choices and physical activity, preferable outdoors. It’s our intention over the next year through climbing trips around the country to show that despite few examples in the media or popular culture that people of color do indeed play an active role in outdoor recreation. Collectively we hope to act as role models to inspire our peers and young people in our community to learn more about the opportunities that might be available to them to explore wilderness areas near where they live or in remote locations like Alaska.
I’m incredibly lucky to be part of this group and as we train together over the next weeks I hope to have many stories and insights to share. Unfortunately because we’ll be in the high mountains I won’t have access to the Internet or any other forms of electronic communication. So the Joy Trip Project blog and Facebook feed will be going dark until I return. In the meantime, please share your thoughts and experiences through your own adventures wherever they may lead. If you’re anything like me you’re on the road toward fulfilling your destiny whether you realize it or not.
The Joy Trip Project is made possible with the support sponsors Patagonia, Rayovac and the New Belgium Brewing Company