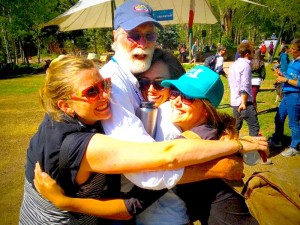 It’s likely each of us will come away from Telluride wondering exactly what it is that we learned at MountainFilm. Despite another late night watching adventure movies at the outdoor theater on the edge of town I woke up Tuesday morning at the ungodly hour of 6AM. As I rose to begin the three-day drive back home to Wisconsin I found myself pondering that illusive question feeling a bit overwhelmed by everything that I had taken in over these past five days.
As a reporter I’m tasked with recounting events as they unfold. Though many things actually happened at this annual gathering of outdoor adventure filmmakers, artists, athletes and activists Mountainfilm is far more than a sequential occurrence of circumstances that can ever be observed in their entirety by any one person. There’s just too much going on. After five years in attendance I’ve learned at least that much. So over the next several months I intend to report on the progress of the many films, books and philanthropic projects presented during the festival and continue the conversation until we gather together again next year in Telluride.
That seems to be the purpose behind the new book by famed film director Tom Shadyac. Titled ‘Life’s Operating Manual’ the paperback set for release later this year offers up some advice on how to lead a more worthwhile and rewarding existence while helping to improve the lives of others. Presenting on the last day of the festival Shadyac detailed many of the ideals discussed among the attendees that often fade from memory upon returning home. This new book provides some guiding principals to keep the Mountainfilm spirit alive.
With the fervor of a revival evangelist Shadyac shared his Operating Manual at the Michale D. Palm Theatre preaching to a rapt audience. The comic director made the case for a system of rules and laws that make life work.
“So? How does life work?” asked a young lady in the front row. “It works perfectly,” Shadyac replied.
The collective silence that followed belied the complexities of both the question and the answer. Each uniquely profound, subtle and naïve they illustrated how life can be simple and utterly confusing all at the same time. It’s these seemingly contradicting notions that we explore at Mountainfilm, how penniless dirtbags with skills in rock climbing and a talent for photography or painting can plot to save the world.
More than halfway across Nebraska I woke Thursday to the faint but distinct odor of urine. After a thousand miles of driving with 500 to go the Lincoln Luxury Inn is a favorite $40 flop for the night. Poor housekeeping notwithstanding the continental breakfast of cinnamon rolls, cereal and black tea not to mention free WiFi this is good spot to stop for a few hours of sleep, a shower and solemn reflection before I make the final push back to the real world.
As I sit in the clothes I slept in and write I’m reminded by the words of Chris Jordon. In a panel discussion moderated by Aaron Huey on Monday morning he and photographers Phil Borges, Todd McGrain and James Prosek pontificated over the true impact of artists.
“I’m not sure that artists can change the world,” Jordan said. “But through our art we change ourselves and the world changes around us.”
While simultaneously evoking Gandhi and the bald kid in “The Martix” Jordan helped to clarify for me the role each of us can play in our respective and mutual journeys through life. Just as National Geographic Young Explorer and photographer Becca Skinner shares her images that depict the aftermath of natural disasters in Banda Aceh, Indonesia and the Gulf Coast of Louisiana so are we inspired by the selfless acts of imprisoned environmental activist Tim DeChristopher whose story is revealed through the film ‘Bidder 70‘ by Beth and George Gage. In the movie ‘Living Downstream‘ from Chanda Chevannes we become enraged and encouraged by the circumstances which lead cancer survivor and Orion Magazine columnist Sandra Steingraber to wage an equally aggressive fight against environmental injustice. And Frank Marshall, in his film ‘Right to Play‘, shows us how former Olympic speed skater Johann Olav Koss makes a difference in the lives of 700,000 children living in poverty around the world through sport.
On the last leg of this very long Joy Trip I find myself excited by the prospects that lay head. Despite the dire circumstances of our broken world I’ve come to realize that things are only going to change if I do. At Mountainfilm I’ve learned that I can take proactive steps to improve the condition of my life and the lives of those around me. And it’s good to know I’m not alone. Through art, athletics, adventure and activism we can all do our part to make the world a better place for each of us. That’s just the way life works and it works perfectly.

[cincopa A0BAV4aHyZd-]
The Joy Trip Project is made possible with the support sponsors Patagonia, Rayovac and the New Belgium Brewing Company