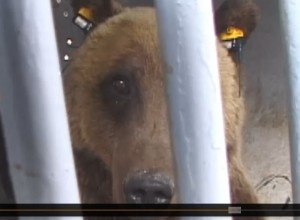 Few movies you’re better off watching from home. A new film created by Jeremy Mendes and Leanne Allison premiered at the Sundance Film Festival to deprive big screen viewers a unique opportunity to interact online with a captivating central character.
Bear 71 follows the tragic life of a female grizzly radio tagged and monitored electronically from 2001 to 2009 in the Canadian Rockies’ Banff National Park. Through motion activated still and live action cameras the filmmakers successfully documented her interactions with other animals and human visitors to tell the story of wildlife management from the sympathetic perspective of the bear.
A 20-minute documentary Bear 71 takes viewers on a guided journey through her home range. Narrated in her own words the mother grizzly details the challenges she must face as she tries to evade both contact and harassment among the millions of humans that cross her path every year.  Global positioning satellite telemetry creates a detailed map of her movements that allow park rangers to follow her wherever she goes. And viewers online can track the course of her existence right up to the moment of her sudden and most untimely death.
Unfortunately it’s the same technology used to create this film that ultimately derives its outcome. Human intervention made possible through machines and electronic gadgets drives Bear 71 and her cubs into an environment that runs contrary to a million years of evolution.
“It’s hard to say where the wired world ends and the wild one begins,” she mourns. “What’s the first rule of survival? Don’t do what comes naturally.”
Bear 71 is a graphic depiction of the glaring contrast between human civilization and the untamed wilderness.  With state of the art social media and web-based interactivity the film’s video game-like quality might even serve as a subtle reminder of what we stand to loose should we fail to protect the natural world, the great open prairies of Canada. A virtual experience may one day be all that remains.
Despite the new first rule of survival a grizzly bear will always do what comes naturally. “The thing is you can take the grizzly out of the prairie, but you can’t take the prairie out of the grizzly,” said Bear 71. “If you take us by surprise we don’t look around for a tree to climb. We take what’s coming, head on.”
And in a direct confrontation with humanity, that’s a fight she simply will not win.

Bear 71 from National Film Board of Canada on Vimeo.