02 Nov Foodie on the Poutine Express – The Joy Trip Project

My wife Shamane, ace reporter and culinary connoisseur, asked while I was packing.
“What kind of food will you eat in Banff?”
Even after several visits to Canada I wasn’t really sure what kind of goodies I had to look forward to. So while I gave it some thought I stalled with the first thing that came to mind.
“Canadian bacon,” I said as with chuckle. 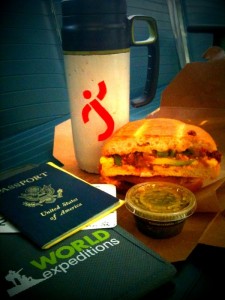 A year ago I ordered breakfast with my friend writer and climber Jim Davidson, author of the new book “The Ledge.” At this mountain village café I was surprised to learn that bacon and eggs translates to a completely different meal north of the boarder.

“What did you expect?” Jim said when our orders arrived with a three disks of pressed lunchmeat that looked like ham. “When you order bacon in Canada that’s what you’re going to get.”
So now when it comes to food on this annual trip to the Banff Mountain Film Festival I try to keep an open mind. And in answer to Shamane’s question what I’m really looking forward to when I arrive in Canada is big order of Poutine.

“What’s that?” she asked.
Poutine is local favorite that’s basically a cone of French fries slathered in brown gravy and mixed with cheese curds. Blinking Shamane paused with her mouth hanging open.
“You’re kidding,” she finally said. “That sounds gross!”
Being from Wisconsin you’d think my wife would have at least a little appreciation for anything continuing cheese curds. Dense and rich with salty flavor curds are a delicious byproduct of the cheese making process. Usually eaten by themselves like popcorn cheese curds are the best reason for hard ski workouts through the winter months. Add fries and gravy to make Poutine and they’re sensational.
On my way to the Banff Mountain Film Festival I suddenly find myself on the prowl for other great food finds. With the better part of a week to watch adventure movies and chat with writers and explorers I’ll also look for a few delicacies to share along the way. So far my most amazing discovery is at O’Hare International Airport in Chicago. 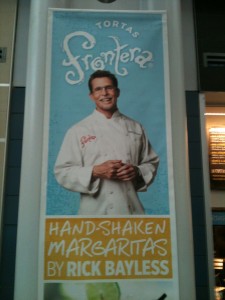 Restaurateur Rick Bayless has opened a food court version of his signature kitchen Frontera. A selection of authentic Mexican dishes includes to-go items like made to order torta sandwiches and open-faced molletes. Fresh ingredients in generous portions take the sting out of an extended layover between flights. Located in concourse B it’s worth the stroll on the moving walkway under the tarmac from C if you have time to get a yummy bite for breakfast or lunch.

I had the egg  and chorizo torta. On hand-made flatbread with smoked green chili salsa tomatoes, onions peppers and avocados it’s out of this world. Fuel by a Mexican breakfast, served up with Midwest hospitality I’m riding the a fun food film inspired express to Canada. And with an appetite for adventure media I’m psyched experience and take in everything that Banff has to offer. ~ JEM