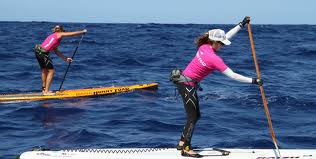 An open water channel crossing of the Hawaii Islands will always make for good cinema. And in that Destination 3 Degrees, a film by Chris Aguilar and Soul Surf Media Productions, does not disappoint. Though hardly a triumph of movie-making, the film pulls together the key components of a complex recipe that blends adventure and conservation goals to document an amazing athletic achievement.
With a solid nod to the global ocean plastic proliferation crisis the movie depicts the stand-up paddling expedition of Jenny Kalmbach and Morgan Hoesterey as they traverse the three degrees of latitude that separate the islands of Hawaii. The film is an inspiring story of two women who push their limits to make their adventure dreams a reality.
Shot on a shoestring budget, Destination 3 Degrees lacks a lot flashy production values, but Aguilar more than makes up for that with breathtaking cinematography back-dropped by the blue waters of a tropical paradise. That’s a hard target to miss. Fortunately it’s not all eye candy. Viewers will find compelling the true struggles of Kalmbach and Hoesterey as they navigate not only the turbulent waters of the Pacific but also their sometimes conflicting styles of paddling. With very little inter-personal drama, the women put their differences aside to make each crossing as team in the spirit of adventure united to achieve a common goal.
True to many adventure-based projects filmed in the wild Destination 3 Degrees makes a point of acknowledging the impact of human behavior on the environment. With segments dedicated to comments from experts on how plastic waste materials are inundating the world’s oceans Aguilar helps to make the case for conservation. Along with the heartfelt testimony of the two paddlers, the film illustrates the damage inflicted upon beaches and sea life by indiscriminately discarded plastic containers. But not instrumental to the broader story, the environmental protection message falls a bit flat. Though sincere in its purpose the film does little to bring any new information to the issue and merely reiterates much of what has been well documented in other movies.
Aguilar still deserves a great deal of credit for uniting a solid team of athletes and other watermen to make this story happen. As stand-up paddling grows in popularly both on the oceans and land-locked lakes this compelling  journey will motivate viewers of many interests and abilities to take up the sport and the cause of preservation. In a world where water fresh and salty is at risk Aguilar shows us that the three degrees of latitude that separate the Hawaii Islands bring us all closer together than we realize. ~ JEM