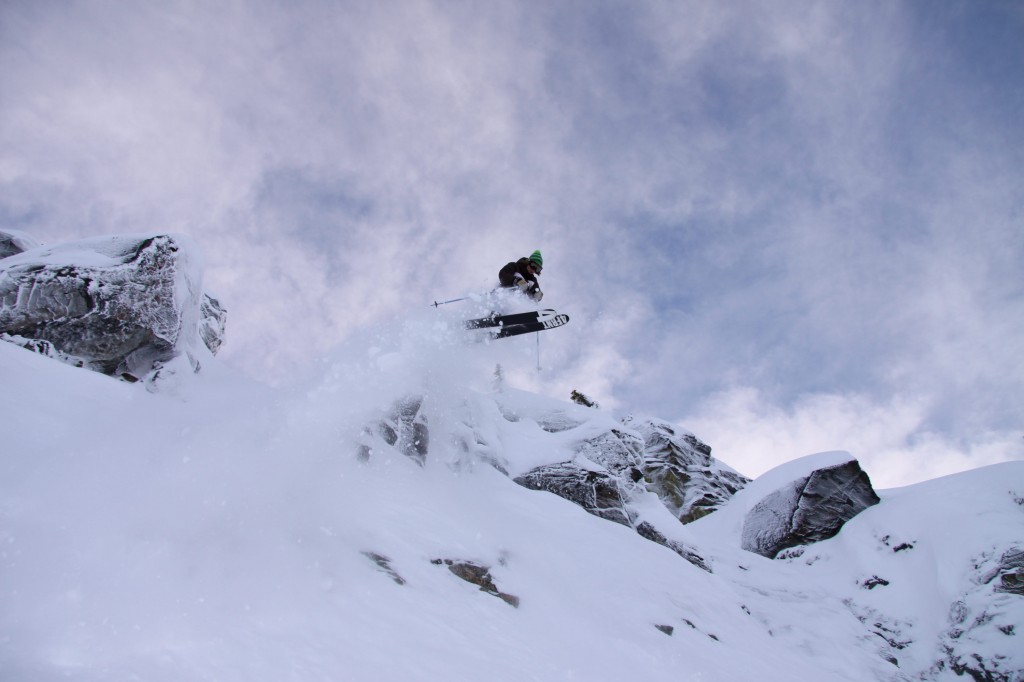 From the film Rev: A Buried Treasure.

They say that pornography is hard to define. But you know it when you see it. The term “ski porn” has been used to describe many of the fast-paced alpine thrill rides typical of the Banff Mountain Film Festival. But last night’s Snow Show was an eclectic mix of gratuitous free-based adrenalin mainlined with thoughtful expressions of art and brilliant cinematography.
The Storming, a film by Travis Robb and Mike Hatchett, began the evening’s festivities to define the term. True ski prorn, in this case snowboarding, is a series of riveting lightning fast images that come at you in quick succession providing one jolt of excitement after another. What the film lacks in dialog and character development it more than makes up for with music and talented performances by some of the best board riders in the world. A sense of place would have been nice as we were bounced from ski resort to school playground to construction site. But why let the story get in the way of a good time.
Desert River by Ben Sturgulewski and Nick Waggoner is a pure alpine art film. Shot in Haines, Alaska this short paints a portrait of a region of high desert, its deep power snow for skiing and the Chilkat River that passes through it.
Rev: A Buried Treasure by Vance Shaw provides an intimate look into the rich life to be had in a classic mountain ski town. Revelstoke British Columbia is home to passionate skiers who have dedicated their lines to riding the pure lines of a world class mountain resort that still has that small town feel.
Chimaera: Sounds of winter by Dave Mossop celebrated it’s world premiere last night with a film of rich cinematic quality and storytelling that takes full advantage of the visual. Shot using a high-speed camera at 1000 frames per second, the short film captures images with such clarity and depth of focus as to bring the spray of snow, every frozen crystal to life.
Deeper by Jeremy and Steve Jones is a sweeping exploration of snowboarding well out of bounds. Leaving snowmobiles and helicopters behind, the filmmakers chase pure snow, high mountain slopes in true alpine style. With incredibly steep freeride descents this feature film sets a new standard for snowboard mountaineering.
The images that come out of a film series like this bring to mind and heart too many emotions to count, and among them are certainly a lust for adventure. There is ski porn to be had at Banff to be sure, but presented with great integrity there’s nothing lurid about it. The Snow Show and the other films here offer up a clear and compelling vision of alpine culture that can only encourage the highest of human aspiration.

Coverage of the Banff Mountain Film Festival is made possible by the generous support of sponsor Patagonia.