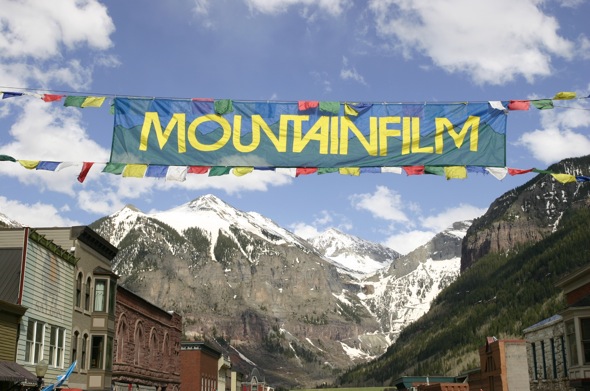 The Mountainfilm Festival in Telluride announced today its final selection of movies to appear in the next month’s Memorial Day weekend event. The annual celebration of mountain culture promises to deliver an eclectic mix of motion pictures that will not only thrill but inspire. Though centered around the active outdoor lifestyle the list of pics aims to challenge audiences to think critically about their actions in the world where they live and play.
“We are particularly excited about the festival this year,” said director David Holbrooke in a press release. “We have a very strong and varied lineup of films, speakers and artists. We have accomplished mountaineers like Ed Viesturs and Conrad Anker but we also have artists like Maya Lin and Chris Jordan. We have environmental activists like Dave Foreman and Tim DeChristopher but we also have civil rights activists with two Freedom Riders coming to town.”

The films included “The Cove”, the 2010 Oscar winner for best documentary on the hunting of dolphins in Japan, “The Wildest Dream”, a adventure bio pic on the life of George Mallory who perished on Everest in 1924 and “Music By Prudence” an Oscar winning short that depicts the life of a disabled singer in Zimbabwe. The list goes on and on as roster of the best domestic and international films on the human condition in concert with the natural world.
But at Mountain Film the movies typical play a secondary role to the conversations that happen in between screenings. Though the films themselves follow a variety of different themes this year festival’s Moving Mountains Symposium will focus on the Extinction Crisis, the plight of animals around the world dying in record numbers, many beyond the point of recovery.
“At first we thought to call it the bio-diversity crisis. But not everyone knows what that means,” Holbrooke said in an interview. “But extinction? Everyone understands that. It’s a crisis. But it’s a crisis we can address.”
Due in many cases to human activity on the planet species are going extinct. Throughout the weekend guest speakers and attendees will discuss many of the key issues behind the destruction of habitat, presenting many of the causes as well as the solutions.
“There are a lot of smart people out there that don’t know the extinctions crisis exists,” Holbrooke said. “But Maya Lin the artist, she’s the one who really explained it to me. And unlikely people like Rick Ridgeway, he a climber, but Rick really understands the central focus of this.”
One movie in particular at Mountain Film addresses the issue of extinction. “Call of Life” is a documentary that illustrates the most significant loss of species on the planet in last 65 million years. “And we’re now starting another mass extinction,” said Stanford biologist Paul R. Ehrlich in the film. “Except this time it’s not an asteroid. It’s our own species homo sapiens that’s doing the job.”
Deep discussions, inspirational speakers and intelligent activists make Mountain Film an event not to be missed. Tickets and show schedules are available on line at www.mountainfilm.org. Hope to see you there!