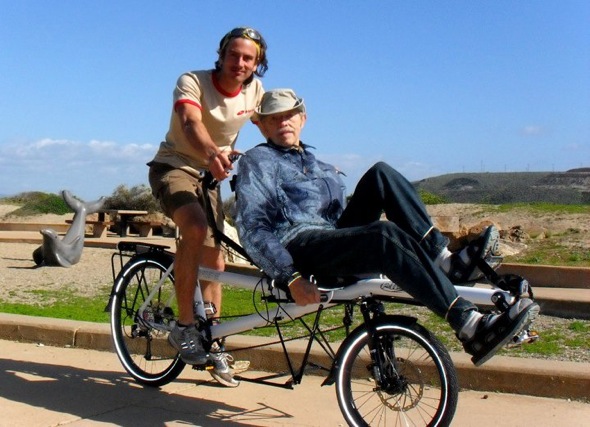 Fans of the documentary “Take a Seat” by adventure filmmaker Dominic Gill will be happy to hear that the biking Britain has a new project in the works. On the heels of his trans-continental trek from Alaska to Argentina, Dom is now planning to take a 74-year-old California man on a tandem bike ride across the United States.

In 2006 Ernie Greenwald was retired and living quietly in the town of Lompoc. Six months to the day that his wife passed away, Ernie met Dom. And inspired by the spirit of adventure the two peddled 60 miles together on Dom’s tandem bike to Santa Barbara.
Now despite suffering from Lymphocytic Leukemia Ernie is heading out on a grand journey to explore his country. Riding a custom tandem/upright/recumbent hybrid bike Dom and Ernie plan to peddle coast to coast in search of the American Dream.

“It’s about squeezing what you can out of life and not letting the hurdles stop you,” Dom said this morning in a Facebook chat session. “Its about discovering whether the age-old hospitality that built America in the days of the founding fathers still exists in some small comfortable way.”
The two will begin in June, 2010. The Joy Trip Project will follow their progress and post updates to this blog. Who knows? We might even find them on the road and bring you direct reports from the field. Look for a documentary on the Dom & Ernie Project sometime in 2011.
Find details and follow along on Facebook: http://www.facebook.com/group.php?gid=27752458842